View source
watch 01:36
We're Getting Mutants in the MCU - The Loop
Do you like this video?
Play Sound

"Some folks call it a sling blade, I call it a kaiser blade. It's kindly got a long wood handle kinda like an ax handle with a long blade on it shaped kinda like a bananer. Mhm. Sharp on one edge and dull on the other'n. Mhm. It's what the highway boys used to cut down weeds and whatnot."
―Karl Childers[src] 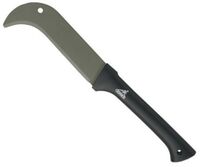 A Kaiser blade is a double-edged sharpened tool used for the purposes of cutting through thick vegetation such as undergrowth, weeds and brush. The curved blade is affixed to the end of a wooden handle that is approximately forty inches in length. Other common names for this tool are bush hook, ditch bank blade, briar axe, and surveyor's brush axe, but it has since become popularly known in current culture as a sling blade.

In the 1996 drama Sling Blade, mental patient Karl Childers was remanded to the care of an Arkansas state hospital in Benton after murdering his mother and her lover with a Kaiser blade. Some time after he was released, he described the tool to a young boy named Frank Wheatley. He later described it again to the abusive Doyle Hargraves just moments before he killed him with it by delivering two swift strokes to the head.

Community content is available under CC-BY-SA unless otherwise noted.
Advertisement